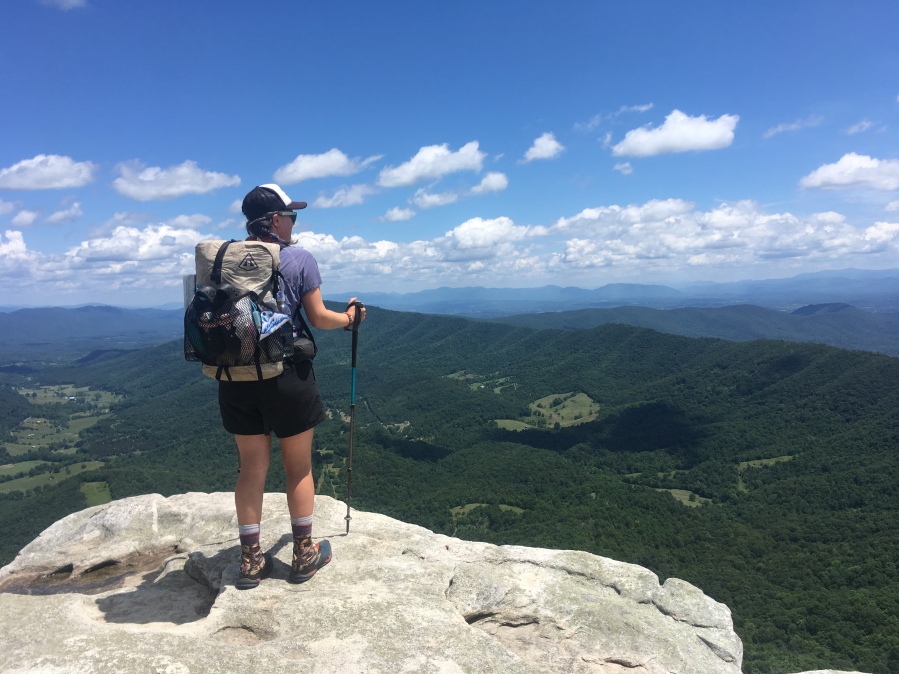 Hikers love talking about gear. I think the only thing we might love more than talking about gear is buying new gear. Believe me, I understand the impulse to purchase a whole new kit before another thru-hike. It’s exciting to look back on past hikes and to tinker with the setup, upgrade items to newer versions, or just to replace what’s worn out.

But I won’t be doing a lot of that before my PCT thru-hike. Here’s why.

I was very tempted to buy a new pack for this hike. I used a Hyperlite Windrider 2400 for the Camino del Norte and Camino Primitivo in 2018 and my entire thru-hike of the Appalachian Trail in 2019. I love that pack. It’s a sleek design, it’s waterproof, and it keeps all my gear compact and tight.

I took a Sharpie to it on the AT and added quotes and words as I went along. They are a little faded now, and between that and the dirt, the dyneema fabric is more gray than white. The mesh on the inside has a huge hole. A mouse chewed through one of my hip pockets, and I mended it with a patch that says “Absolutely Tickety-Boo!” The water bottle pockets are losing their elastic, and if there aren’t multiple bottles shoved in one pocket, they tend to fall out.

I’ve had that Hyperlite since 2018. It has seen me grow in so many ways over these past four years. It’s seen the countryside and coastline of Spain. It’s been on the entire length of the Appalachian Trail. It’s been with me when I lived in Arizona, Ohio, and Kentucky. It’s covered in Neil Gaiman quotes and Good Omens references and Camino and AT sayings like se hace el camino al andar—”the way is made by walking”—and No rain, no pain, no Maine.

In short, I love this pack. There will come a day when it will absolutely fall apart, when it will fail to keep my gear dry, or when it just isn’t strong enough anymore to meet my needs. But until that day comes, I’m going to keep hiking with my baby.

I guess that’s more a saying than a reason, but the point still stands.

I almost bought new hiking poles. EDIT 4/13: I did in fact buy new poles after inspecting my old ones and deciding they were just about dead. My bad. Sometimes you do just need new gear. Read on to find out what will become of the old ones!

My Black Diamond Trail Ergo Cork trekking poles that I bought in 2017 for the Nüümü Poyo look really rough. The fabric on the straps is coming apart. The handles have faded to an atrocious shade of gray-brown from months of hand sweat on the AT. You can barely read the numbers, and I’ve already had to replace one of the tips.

But they still work just fine. There is nothing structurally wrong with them. They keep me balanced and my tent pitched. So I’ll wash off the handles and whip out a needle and thread and see if I can mend the wayward fabric of the straps.

There’s no sense in replacing a piece of gear that still works, even if it does look a little worn-out. America’s landfills are bursting with things that still work, or still would work with a little TLC. I see no reason to buy a new pair until this one breaks and I have no choice.

Of course, as of April 13, I have in fact decided to buy new poles. But the old ones will be sticking around as backups that live in my car. I won’t be trashing them as long as they have some life left!

Reason 3: You Can Replace Gear on the Trail

A magical fact about long-distance hiking that I learned while on the AT is that you can replace your gear as you go.

While I was planning that thru-hike, I was frantic about having the “right” kit. What if I got out there and realized that I didn’t like my quilt? What if I wasn’t warm enough? What if my shoes hurt or I left my tent stakes somewhere or my water filter froze?

Guess what? I left my tent stakes at hostels or campsites at least half a dozen times. Two of those times, no one picked them up and I had to order new ones online and ship them ahead to myself. In Virginia, I got shoes that irritated my old Achilles injury, and I worried that if I hiked any further in them, they would destroy my feet. I switched back to Brooks Cascadias at the REI in New York City and left the old shoes with a friend.

The trail passes through towns often enough that you can work out these problems if need be. It’s easy to want to get it “right” from the beginning, but it is also easy to replace broken or inadequate gear while on the trail. That way, you will know what will suit your needs better than trying to predict it ahead of time!

I know, I know. It sounds preachy. But I just have to throw it out there.

This is just my perception, but I think that as hikers, we may sometimes imagine ourselves as being more eco-friendly or aware of the environment than the average “non-outdoorsy” person. We hold up companies like REI and Patagonia as being “green” or “sustainable” or “woke,” thereby justifying spending money there.

While there are things that I do appreciate about brands like these, they are still just companies. They still want you to buy more. And while hikers do obviously need gear, it’s easy to get sucked into the mad pre-hike buying frenzy rather than sitting down and considering what we actually need.

I’m trying to resist that impulse to buy indiscriminately, and be a little more intentional with what I absolutely need to replace.

Gear that I DID Replace

Despite all this, there are obviously still some things that I need, and that I have acquired, for this hike. Here are a few examples:

These are just a few of the pieces of gear that I have changed or will change over the course of this hike.

If this were my first thru-hike, I would inevitably need to buy more gear, do more research, and really consider what would work for me and what wouldn’t. It’s a process that everyone goes through.

I’m excited to see how my gear holds up and how it changes over the course of the hike.

Sunrise on Baden-Powell, 400 miles, so much lupine and snow plants, and a road walk to avoid a section of trail closed due to endangered frogs. What’s next? Love this wild, hot, dusty trail!
Highlights from the past week on the PCT:
Zero day in Idyllwild with my big wacky tramily ❤️
Alexa, play “Wildflowers” by Tom Petty
Yesterday was probably the best day on the PCT so far. After a refreshing unplanned zero, we went back onto the trail. There were views all day. There was trail magic. There were flowers and laughs and cacti. We cruised our first 20-mile day, much earlier than I thought we would. We found a beautiful campsite, and I stared at the stars. Life is good out here.
Some scenes from the early PCT, including, but not limited to: wildflowers, ridiculously beautiful landscapes, new friends, neat rocks, and very, very cold wind. Swipe all the way to see how hikers ward off hypothermia when it hails in the desert. 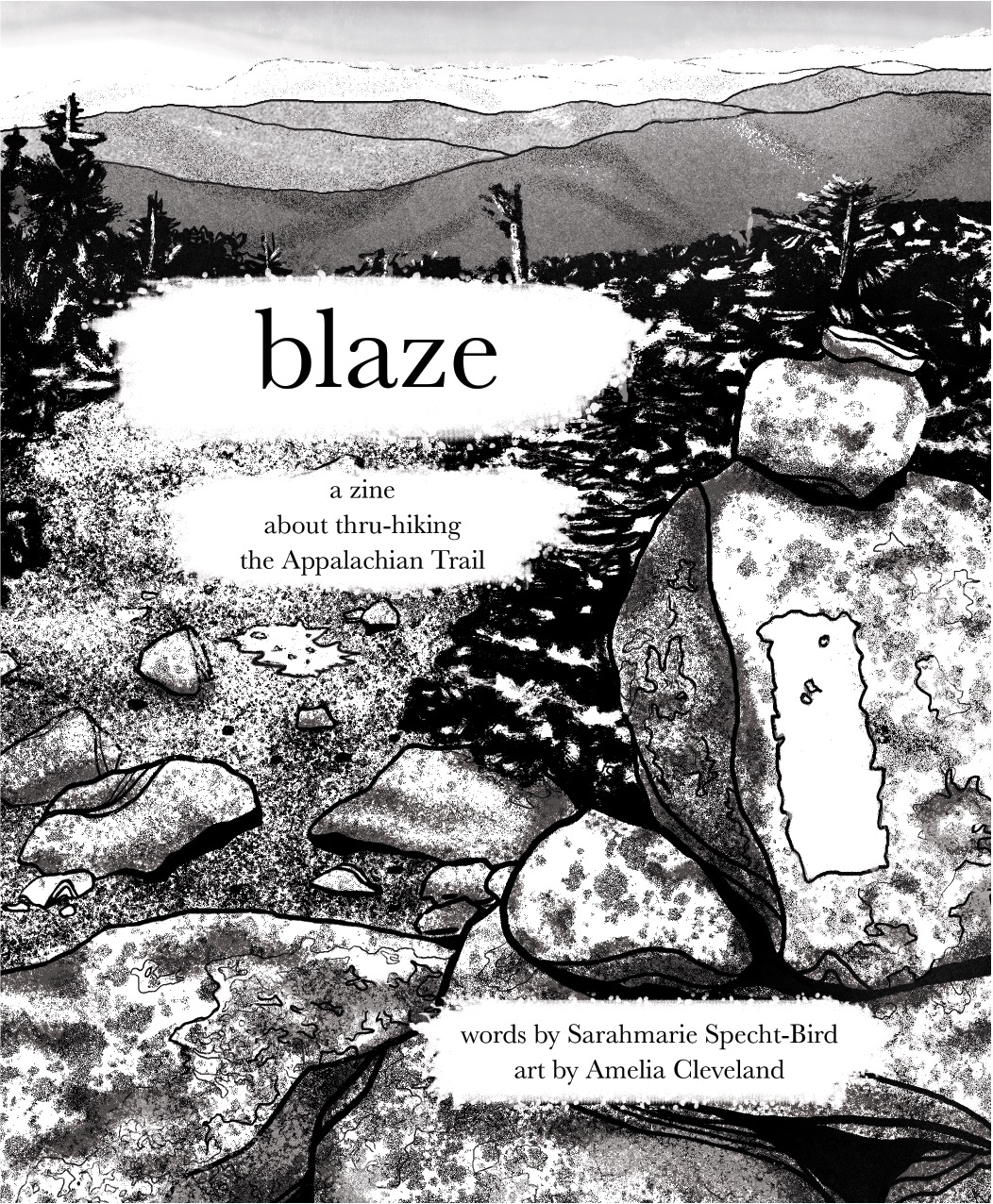