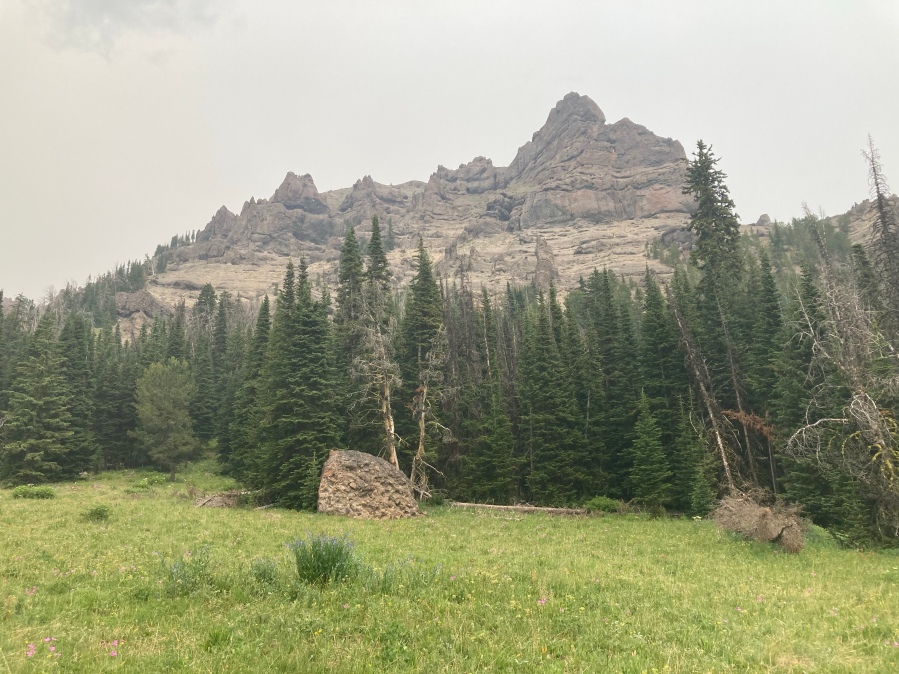 Although my GPS said it was about 8 miles to Ramshorn Lake from Windy Pass, I remembered reading a trip report that had today’s mileage around 13. Classic Gallatin Crest. Nothing for certain, everything guesswork. 13 miles would be a long haul at this elevation, especially without water sources. So, miraculously, I actually managed to wake up a little earlier than usual today just in case I did in fact have to go that far.

I still had a pretty leisurely breakfast after I packed up, however, and I enjoyed the hazy sunrise. It was a little smokier today than yesterday, which made me a bit worried about my ability to go through a (potentially) long water carry, but it didn’t turn out to be too bad.

The first part of today was really pleasant, through more grassy ridges with nice views. Soon, though, the trail headed straight up the side of a mountain. No preamble, no switchbacks. I looked at my GPS, and it seemed like this monstrosity of a path was not the trail. But I also didn’t remember passing any other trail-looking things down in the valley.

I turned around and tried to find the red line of the trail, but again, I didn’t see anything resembling a trail where I had come from. So I decided to go with my gut again, and started climbing this ridiculous hill. At the top, it looked like it was the right choice: perfect cairns were spaced at decent intervals across another grassy field. I walked across it joyfully, but soon became worried because this trail was so far from the track on my GPS.

I decided to trust the cairns. So far, that choice has been the correct one on this hike. The cairns, the more obvious path, and the gut feeling are to be trusted. As I kept going, though, the trail became rockier and much less official-looking. It had fantastic views, and the rock formations were interesting, but I became more worried with each step. I ended up on a very precarious-feeling ledge, found a way around it, and checked my GPS again. There, at last, was the actual trail.

This sort of mishap happened a few more times throughout the day, though none as intense as that scramble. It’s frustrating because the trail on both my print-out topographic map and on my GPS don’t even have any trails printed where those alternates took me. I suppose that’s sort of the appeal of this trail for some people. Every trip report I found online did mention something about how “some route finding is required.” Still, it is a little concerning when you aren’t sure if you’re headed the right way, especially while hiking solo.

I don’t think this would be as much of an issue if I were hiking northbound instead of southbound. Every time I have taken an alternate and ended up at the trail on the south side, I have looked back and observed a clear path of cairns. From the other direction, it isn’t as certain. This is something I would have liked to know as a southbound hiker on this trail!

After I got back on the trail after the rock scramble, I was able to enjoy the views. At one point, the trail meandered through a grassy meadow with scattered rocks, and then it traversed a very narrow ridge with steep drop-offs on each side. This really felt like the “crest” in Gallatin Crest, and, although it was quite smoky today, it still afforded gorgeous views across to other peaks and down towards interesting rock formations.

After eating lunch on a ridge, I walked down into another grassy meadow, and then into a thick conifer forest spotted here and there with wildflowers, then back up onto the ridge. This particular hill was incredibly steep, and it crossed several blown-down trees on its nearly-vertical path up to the saddle of Fortress Mountain. This mountain definitely deserves its name. In contrast to some of the other, grassier peaks, this one is a wall of chossy, deep brown-gray rock that stands in interesting formations and, at places, tumbles down in a rockslide towards the valley below.

When I got down below the mountain, I looked around at the rocks and realized that some were actually petrified wood! I had noticed on my map earlier today that I was passing next to Gallatin National Petrified Forest, but I didn’t think I was actually going to go through a part that had petrified wood! It was cool to see them lying there, remnants of an ancient forest transformed into stone.

As I continued further downwards, I ran into a few more intense blow-downs. Some of these trees were so large that I had to reroute around the trail. On one such occasion, I found myself in a large boulder field, surrounded by massive conglomerate rocks. I had to scramble up and around a few of these boulders until I found the trail again.

Despite all of today’s challenges, I arrived at Ramshorn really early, maybe around 3. Considering all of the alternates and reroutes today, along with my arrival time, I put today’s mileage somewhere around 10. It was definitely less than 13, but felt longer than the GPS’s calculation of 8.

The approach to Ramshorn Lake is a gorgeous meadow teeming with wildflowers (and biting flies). When I got down towards the lake, I noticed three horses in a corral, and I saw two people on the shore. I went towards the water to check out a campsite, and then I started chatting with the women. One, Molly, is a horse vet, and the other, Anna, is about to be one. They became friends after Molly, who is older, served as a kind of mentor to Anna as she was exploring veterinary medicine. They were really cool folks, and I was relieved to see other human beings after so much uncertain solitude for the last three days.

It was so early when I got to Ramshorn that I was planning to keep going, since I’m meeting my friend Lauren, her mom Kim, and their friend Mare tomorrow at the trailhead in the early afternoon. However, I was ultimately convinced to stay here at the lake, since it’s safer in a group, there’s a nice campsite up the hill, and I’m enjoying Molly, Anna, Flya, and the horses’ company.

Molly shared some of her wine with me and let me try fly fishing in the lake with her rod. I was unsuccessful, but it’s definitely something I’d like to learn at some point. They left for a little ride around the meadow, and I stayed by the lake attempting to fish, relaxing, hydrating, and getting absolutely eaten alive by biting flies and mosquitoes (despite many layers of DEET and a head net). Nonetheless, I enjoyed dinner by the lake when they returned, and I’m so happy to be camping in a group.

Tonight feels like an answered prayer. I had been a little worried about camping near Ramshorn ever since I ran into that northbound hiker on the first day in Hyalite Canyon. He had mentioned that he saw herds of elk and mountain goats in this area, suggesting that there is more wildlife activity here than elsewhere on the Crest. I also knew that camping by water is iffy, since bears tend to congregate there, and that since this is a lower elevation and more forested than my other campsites have been, it could be a little riskier in terms of grizzly presence. Between the horses, the dog, the fact that there are now two other people, leading to a safer number of three, and the pleasantness of human company, it feels like God, the Universe, the Trail, said, “I got you” and gave me this night.

If there’s anything that I have learned from long-distance hiking, it is that the old mantra, however cliché, is true: the trail provides. Put yourself out there, do the hike, and the rest will follow. Trust the trail. It knows what you need more than you do.

I’m sad that this hike is coming to an end tomorrow. It has only been a few days, but it has reminded me of who I really am and what I want out of life. Though the hills were challenging and the air was smoky, and though I was afraid of bears and camping alone, I feel like a more competent and confident backpacker after this trail, and I am hungry for more.