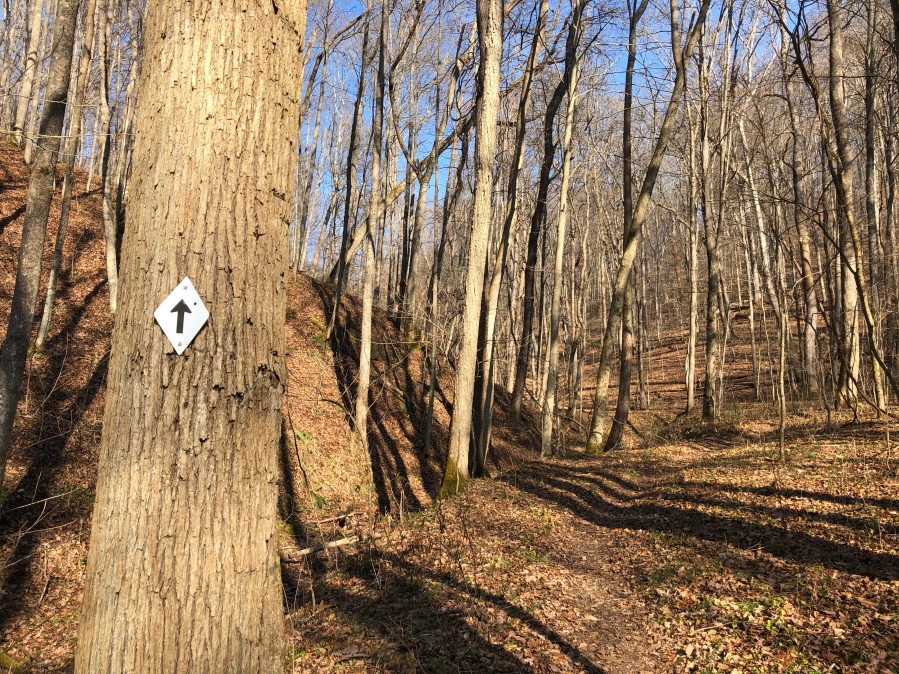 Keeping my writing up-to-date is one of my numerous New Year’s resolutions. I struggle to write as often as I’d like, despite the fact that, if I’m honest with myself, I really do have the time. But instead of updating my blog I sometimes decide to do things like binging all of The Queen’s Gambit in one night. I justify this by telling myself that I can crochet while watching TV, so it’s not a waste of time. But in reality, I only get half of a cactus done because my eyes end up glued to the screen. Ah, well. It’s something to work on.

Anyway, let’s talk about hiking! Back in December Wiggs and I took a day to explore a new (to us) hiking area in Ohio called Wildcat Hollow. It was a beautiful day, a fun ride, and a great place to hike.

We got a somewhat decently early start on the morning of December 9, packing lunch and snacks and heading east out of Columbus. The drive was easy at first, following I-70 before an exit onto OH-33 and then a series of smaller county routes. The road grew smaller and narrower, until it was a gravel path passing small towns and abandoned houses and leading into Wayne National Forest. Finally we located the trailhead, parked, and began our day.

I don’t know why we didn’t think to bring overnight gear. There are several great-looking campsites right by the parking lot, and there is a Forest Service privy right at the trailhead. Dispersed camping is also allowed, and we passed numerous sites throughout the day, though the water quality might be doubtful considering the heavy agricultural activity in the area. We kicked ourselves for this oversight all day. We passed up a chance to sleep in the woods! But now we know, and we will be back.

It was a glorious day. Everything was bathed in a warm, golden light as we began the hike in the muddy valley. The trail forked right, and climbed a small hill to a ridge line. Though it was winter and the woods were lacking in color, the sunlight and blue sky made up for the absence of foliage. As I breathed in I was thrown back to Georgia in March on the Appalachian Trail: no green, no shade, but crisp chilly sunlight, fresh air, and the excitement of everything that lay ahead.

The trail at Wildcat Hollow is well maintained for the most part, and the hiking was fairly easy. We followed the ridge for a while, then dipped down into a valley. This pattern repeated for a while: ridgeline cruising, valley creek crossing. Ridge, valley, creek. We also stumbled upon a beaver bog, punctuated by gnawed-down trees. I crouched quietly behind a stump for a few moments, hoping to see the creators of the wetland. None appeared, but I always love seeing the evidence of their engineering.

We also found a large fallen tree riddled with moss and puffballs. Wiggs poked them, coaxing a cloud of spores out into the forest. There was also, less beautifully but no less interesting, a slowly deteriorating TV with its magic board of switches and sensors strewn about the forest floor. How did this TV get here? And how many mushroom spores have brushed against its forever-lasting plastic and metal?

I felt good on this hike, almost as good as I did on the AT. I’ve been running a lot over the past few months, as I want to run a half-marathon in 2021. I felt better than I remembered on any recent day hike, like the climbs barely affected me and like I could go on and on. Wiggs and I meandered in and out of conversation, sometimes about what was around us, other times about what was not. We always orbit back to the Appalachian Trail, reminiscing, then fly away again to other worlds. Until I hike another long trail, this will be the gravity around which I stake my life.

We had a quick lunch after about five miles, and then we headed back the way we came. I cut my hand on a branch and nearly fell into a creek, but such are the usual casualties of a good day of hiking. We finished the loop we had started, passing first an RV and then a small house before heading back into the woods, around another ridge, and downhill to the valley where we started. We bade the mushrooms and trees and sunlight adieu, and got into the car.

I wished we’d thought to look up camping before we left, but it was still nice to spend a day outside. It was a bit of a trek from Columbus, but I’d still be more than happy to go back for a campfire and a clear spring morning among the trees.

Go see it for yourself! Wildcat Hollow is located in Wayne National Forest, about 40 minutes north of Athens and 1 hour and 45 minutes southeast of Columbus. There is a five-mile day hike loop and a 17.1-mile backpacking loop. The hiking is mild and it is possible to complete a long day hike fairly quickly. A USFS vault toilet and several excellent campsites await at the parking lot, and dispersed camping is also allowed on the trails. I might suggest bringing enough water for the whole trip, however, as the area sees a lot of agricultural activity and the water in the creeks may be iffy.

More information about the area can be found at the Forest Service website.

Sunrise on Baden-Powell, 400 miles, so much lupine and snow plants, and a road walk to avoid a section of trail closed due to endangered frogs. What’s next? Love this wild, hot, dusty trail!
Highlights from the past week on the PCT:
Zero day in Idyllwild with my big wacky tramily ❤️
Alexa, play “Wildflowers” by Tom Petty
Yesterday was probably the best day on the PCT so far. After a refreshing unplanned zero, we went back onto the trail. There were views all day. There was trail magic. There were flowers and laughs and cacti. We cruised our first 20-mile day, much earlier than I thought we would. We found a beautiful campsite, and I stared at the stars. Life is good out here.
Some scenes from the early PCT, including, but not limited to: wildflowers, ridiculously beautiful landscapes, new friends, neat rocks, and very, very cold wind. Swipe all the way to see how hikers ward off hypothermia when it hails in the desert.